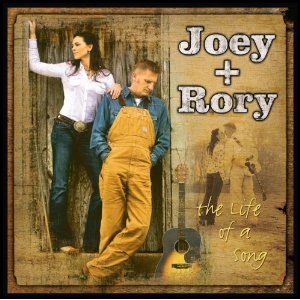 “Turn it up loud so we all can sing along,” sings Joey Martin Feek at the beginning of The Life of a Song, Joey + Rory’s debut album. “Let the people decide if the music is right or it’s wrong. Man it’s a shame, instead of playing the game, play the song.”

Joey + Rory may at first glance look like an overnight success story: they won third place on Can You Duet, CMT‘s American Idol-alike for country duos. Then, they got signed to Vanguard/Sugar Hill Records, and their debut entered the country charts at number 10. Like any successful Nashville act, of course, their sudden success is really the result of years of toiling in country music – in bands, solo, as professional songwriters and producers. Joey’s husband, Rory Lee Feek, has spent more than 10 years writing songs on music row and has several chart toppers for a variety of big-name country singers to his name.

Despite all their insider status, photogenic appearance and polished skills, Joey + Rory make a strong case for traditional country music – both on their website and in their music. Theirs is a highly evolved, focused, beautifully executed set of songs that deserves being heard; actually, I think it’s so good it deserves being loved. Joey has an exceptional, unsentimental country voice – she avoids r&b’s vocal pyrotechnics which are increasingly finding their way into modern country in favour of singing it straight up. Rory seems to have saved his best songs for this commercial debut. The material sounds very ‘finished’ – a songbook that could be sung by other performers and might even work outside the country genre.

Joey + Rory, if they are Nashville’s new beacons of traditional country (together, surely, with people like Patty Loveless), are reformers from inside the system: the musical-industrial complex is their vehicle, and it is within its confines that their music blossoms fully. Not really a duo in the traditional sense (Rory essentially sings background harmonies, like Kristian Bush to Sugarland’s Jennifer Nettles), their collaboration is a songwriter’s with his ideal performer. Youtube has J+R’s Can You Duet audition video, and in it, Rory says that Joey is his singer and he’s her song. Their honest, beautiful, simple and heartfelt songs make that ring true. 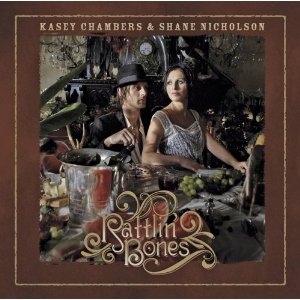 Kasey Chambers is an incredibly talented and accomplished country singer-songwriter from Australia. Hers is also a long story of musical apprenticeship and hard work: born in 1976 into a musical family with strong Australian country roots (you may not know this, but Australia has a vivid country music tradition and industry), she was on stage at an early age to perform with her parents and brother Nash in the Dead Ringer Band, who released several very good albums in the 90s and were extremely successful in Australia. Starting in 1999, Chambers released several increasingly acclaimed solo albums and spent considerable time living, recording and touring in the US. With each solo album, though, she departed a little more from traditional country music, typically in an “alt country” or “Americana” direction. Her sound on these records was not unlike Lucinda Williams’, though Chambers’ music is nimbler, smarter, sexier and (quite a lot) funnier.

In contrast to Joey + Rory, Chambers’ and Nicholson’s songs are mostly dark laments of love found and lost, death, the autumn of relationships and the dark places in our psyches. Rattin’ Bones contains a sort of gothic, Nick Cave world of country music, beautiful but autumnal music filled with intelligent, cryptic and darkly funny words. The tone of the album is a little like the Cold Mountain soundtrack – music meant to evoke another period; music that’s ancient and true. This is very traditional country music, although there are tracks where the deliberate roughness of the production takes it in a dirty garage rock direction and makes them sound like the White Stripes.

What unites the Joey + Rory and Chambers/Nicholson projects is their high quality and unwavering dedication to creating traditional country music. Even though they operate from very different perspectives, points of origin and stages of their careers, their souls – as Chambers puts it on the title track, are “not for sale.”

"Everyone is focused on how we will make work work after such a severe shock to the system. But the ultimate answer won't be found in hybrid remote and in-person offices. The way to make work work is to cut it back." https://j.mp/3rkXc2V

"It would be easy to assume that the pandemic had dealt a final blow to co-working spaces. Instead, they are doing just fine, taking advantage of pent-up remote workers and a very confused commercial real estate sector." https://j.mp/2Uuikrc

"Disruptive though it was, last year's abrupt transition to remote work may, ironically, prove considerably smoother than the shift to whatever counts as normal in the post-pandemic era." https://j.mp/3r5ThH2

"Health officials said the measure was intended to prevent people breathing too fast or splashing sweat on others." https://j.mp/3kdZE9L

"The shortcomings of email have only been exacerbated by the pandemic because it has replaced too much: Decisions that were once made by stopping by a co-worker's desk have been relegated to inbox ping-pong." https://j.mp/3yNTdhQ

"The hulking vessel sailed up the Suez Canal, past a lavish party of assembled diplomats and flag-waving canal authority officials in Ismailia, as smaller boats sprayed jets of water in celebration." https://j.mp/3dUVdg1

"Some of us have been forced by catastrophe to think about what really matters. Some have realized that, for all that we loved our job, our job didn't love us back." https://j.mp/3dookIn

"Hybrid working, hailed by some as the perfect post-pandemic set-up, will quite feasibly create a two-tier workforce in which those who are physically present are professionally favoured over their remote counterparts." https://j.mp/35ZBMOV

"Normally, people see a line and give up, but not that night. The city seemed to have exploded. It was unreal to be back and to have it be not only as good as I'd remembered but better, heightened by gratitude and relief: we were still here." https://j.mp/3h8UCIC